Tattoos With Meaning: 13 Stunning Tattoo Designs for You to Try

Are you searching for tattoos with meaning to get inked? Tattoos are a unique form of self-expression. Some people pick a symbol that’s dear to their heart, others may choose this beautiful art form to convey their personalities, and a few others may solely choose one on a whim.

Though it’s absolutely fine to pick a tattoo solely for its visual appeal, it doesn’t hurt to pick one that’s both meaningful and beautiful. After all, these tattoos are going to be your permanent companions!

Though it’s always a good idea to get a meaningful tattoo, like everything else in the world right now, your options for tattoos are countless! So, here’s a list of some popular tattoos and their meanings to help you narrow down your choices. 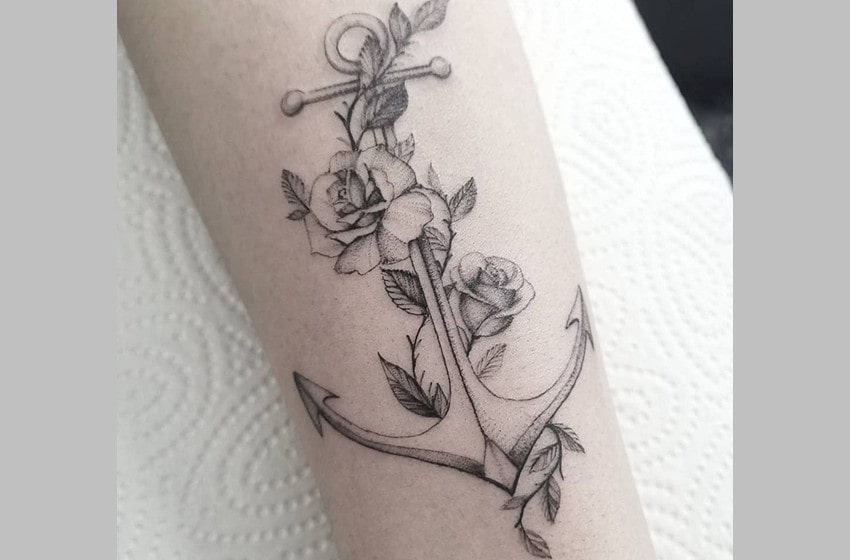 A symbol of strength, stability, and safety, anchors have been popular subjects of tattoos for decades. Once a popular choice for tattoos among men, especially sailors (remember Popeye the Sailor Man?), it has now become quite common and is seen as a symbol of elegance.

Anchors are what keeps a ship from going adrift in the sea due to winds or currents. Sailors often consider an anchor a symbol of hope. An anchor tattoo also symbolizes the unwavering spirit of people who never turn their backs on any obstacles thrown their way. 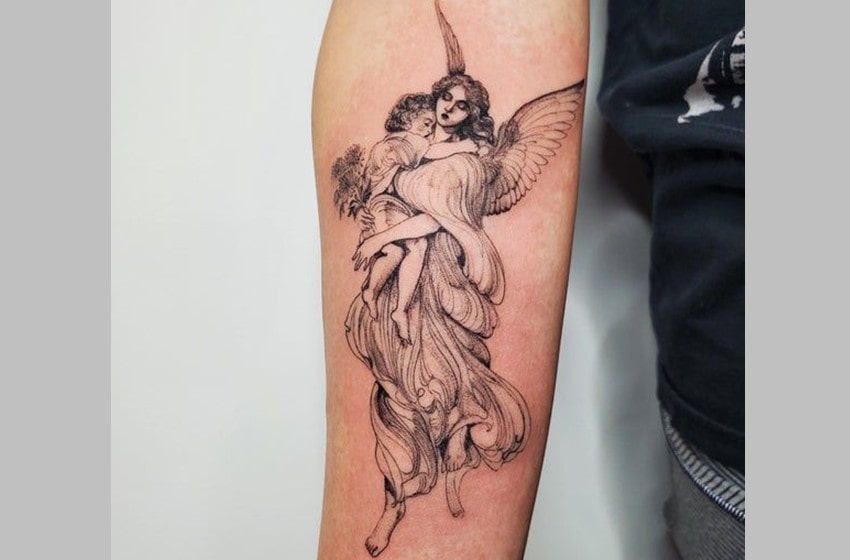 Since time immemorial, angels have played a significant role in human history and culture. They are believed to be messengers of god and keepers of dreams. Angel tattoos thus stand for faith, protection, devotion, and spirituality.

They also symbolize freedom, beauty, innocence, goodness, and purity. In hardships and difficulties, angel tattoos can serve as a reminder to keep our hopes high and our inner lights burning.

In some cultures, people also get an angel tattoo after losing a loved one. It’s seen as a way of keeping them close to their heart and in their memories. A pair of angel wings also depict strength, courage, purity, and love. 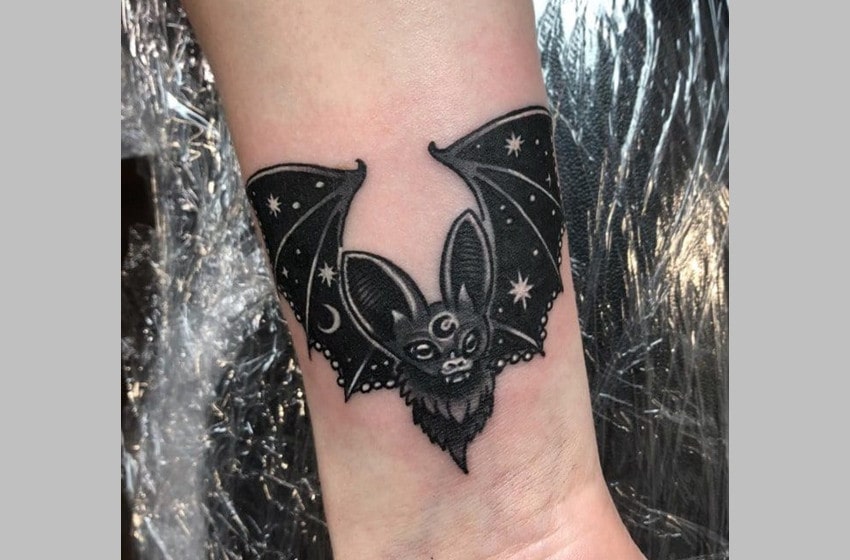 Often associated with mystery, witchcraft, and spooky stories, bats are probably among the most misrepresented creatures on Earth. Bats symbolize different beliefs in different cultures, and most of them are positive.

Since bats are extremely social animals, bat tattoos often stand for family, relationships, and communication. While Native Americans associate bats with rebirth and intuition, the Chinese consider them to be a symbol of luck, long life, wealth, fortune, and prosperity.

And in Greek culture, bats signify motherhood and fertility. A bat tattoo is also seen as a representation of facing your inner demons and overcoming hurdles in life. Bats also depict travel, journey, and happiness. 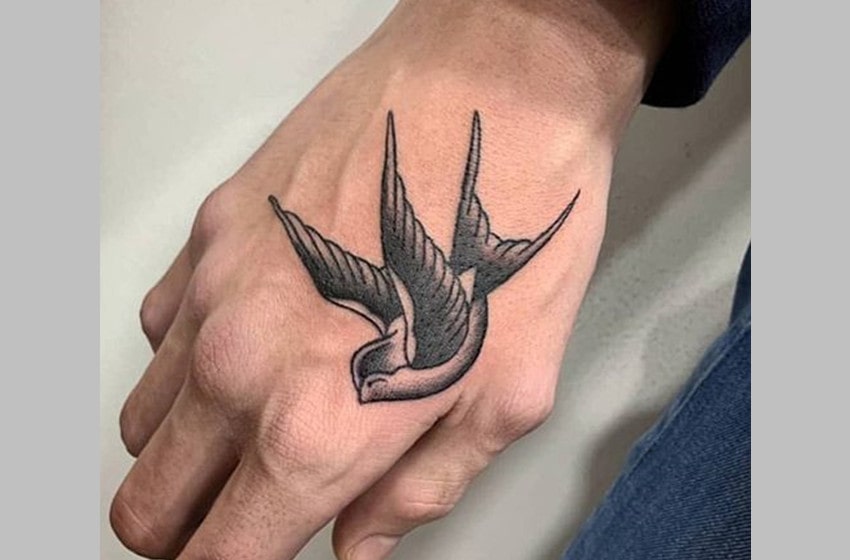 Typically represented as symbols of freedom, birds are among the most popular tattoos today. Different birds hold different significance based on their shapes, sizes, and colors. In most cultures, bird tattoos represent courage, travel, peace, and liberation.

In some cultures, they are also considered symbols of immortality and a human soul’s journey to the afterlife. A flying bird tattoo signifies transcendence, divine beauty, hope, and free-spiritedness. It also stands as a reminder that nothing is permanent in life. 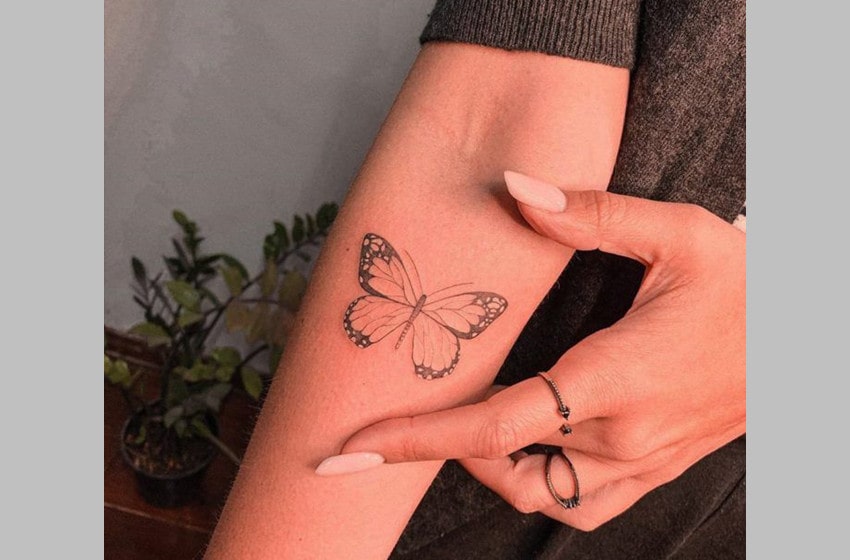 A universal symbol of change, transformation, and liberty, a butterfly is a popular tattoo subject, not just for its visual appeal but also because it holds many deep meanings.

The ancient Greeks and Mexicans believed that butterflies were the physical manifestation of departed souls and spirits. They are thus symbols of renewal and resurrection in some cultures.

Butterfly tattoos are also symbolic of hope, beauty, and confidence and represent feminine beauty, female sensuality, and sexuality. They signify new beginnings and one’s ability to emerge stronger and bolder from challenges and difficulties.

So if you’re going through a period of transformation, or if you’ve overcome any recent struggles or hurdles, a butterfly tattoo would be perfect. 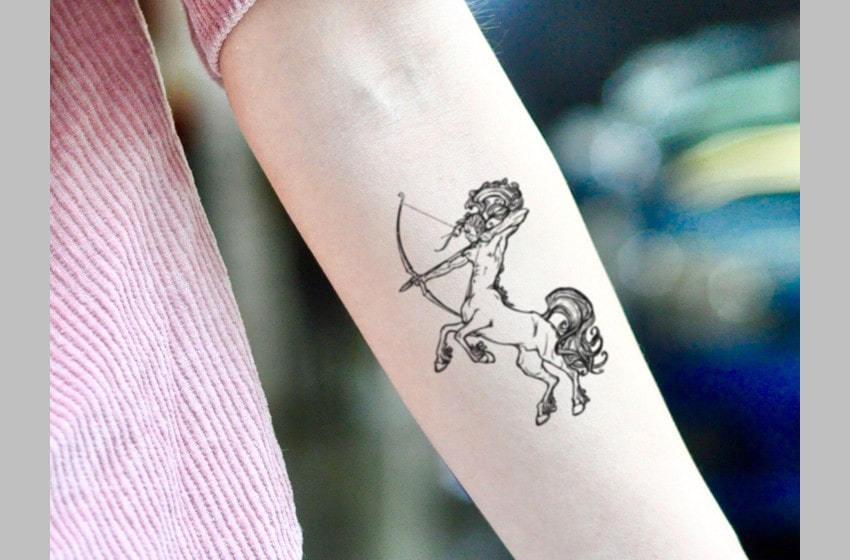 Centaurs are mythical creatures that dwell in the mountains and forests and are half-human and half-horse. Centaur tattoo meanings are complex and colorful. They are symbolic of courage, strength, wisdom, and bravery. Centaurs also signify adventures, animalism, duality, and paradox.

In Christianity, centaurs represent people who are divided between good and evil. A centaur is also the symbol of the zodiac sign Sagittarius, making it a great tattoo option for Sagittarians. 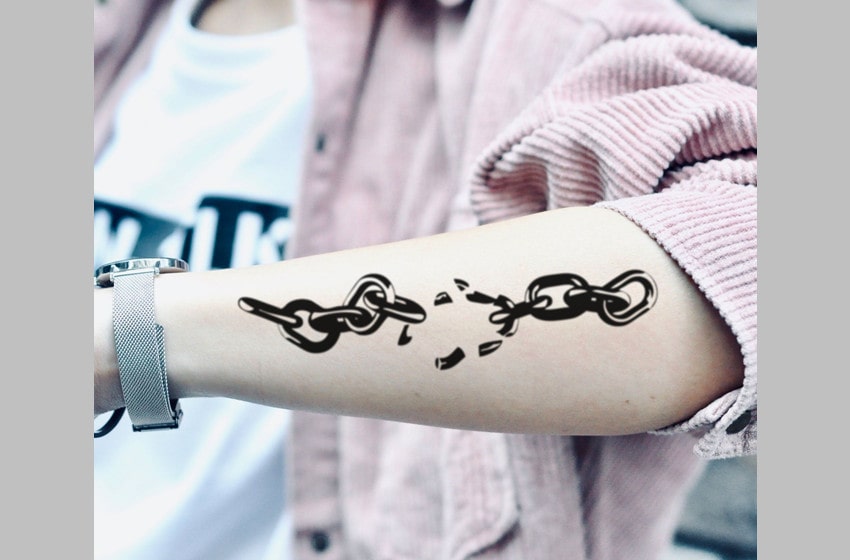 Chain tattoos hold polarizing meanings. While in some cultures, a chain, especially golden, is considered to be a symbol of aristocracy and privilege, in others, it indicates oppression and imprisonment. Some people sport chain tattoos as a silent form of rebellion against the prevailing oppression in the world.

On a more uplifting note, chain tattoos also symbolize love and unity between two loving hearts. Sometimes, it also signifies an eternal connection with an idea or a belief.

A broken chain tattoo, on the other hand, represents freedom. If you have recently overcome a challenging situation or freed yourself from a trying addiction, an open or broken chain tattoo can be a great way to celebrate it and mark the beginning of a new chapter in your life. 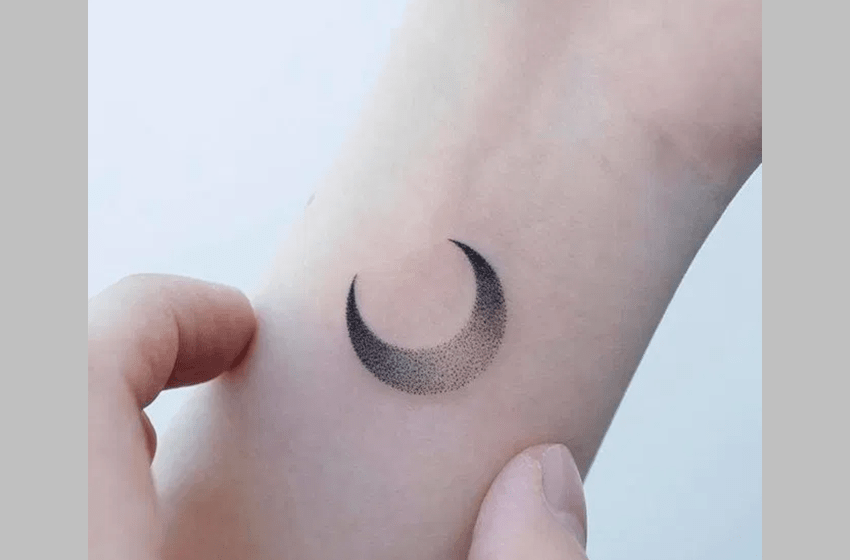 Crescent moon or a half-moon is a popular tattoo choice among women as crescent moons represent womanhood, motherhood, and fertility. This feminine symbol has been worshipped since ancient times. It serves as a symbol of purity in Greek and Roman mythology. It can also be symbolic of creativity, maturity, manifestation, and growth.

For someone going through a new phase in life or about to welcome a new chapter into their life, a crescent moon tattoo can be a great way of celebrating this occasion. It can also serve as a reminder of hope and change.

Nowadays, crescent moon tattoos are even worn by people to express their love of the night.

Crows are intelligent birds, and despite their association with bad omens and bad luck, crow tattoos symbolize many positive things. For instance, in the middle ages, crows were considered to be a symbol of good fortune, and the Chinese have regarded the crow as a symbol of love and creativity.

In North American culture, crows are seen as spiritual guides that offer inspiration and guidance to those seeking it. In China and Japan, a tattoo of a three-legged crow is a symbol of familial affection. Two crows tattoo is seen as a sign of good luck, three crows a sign of good health, and four crows a symbol of wealth. 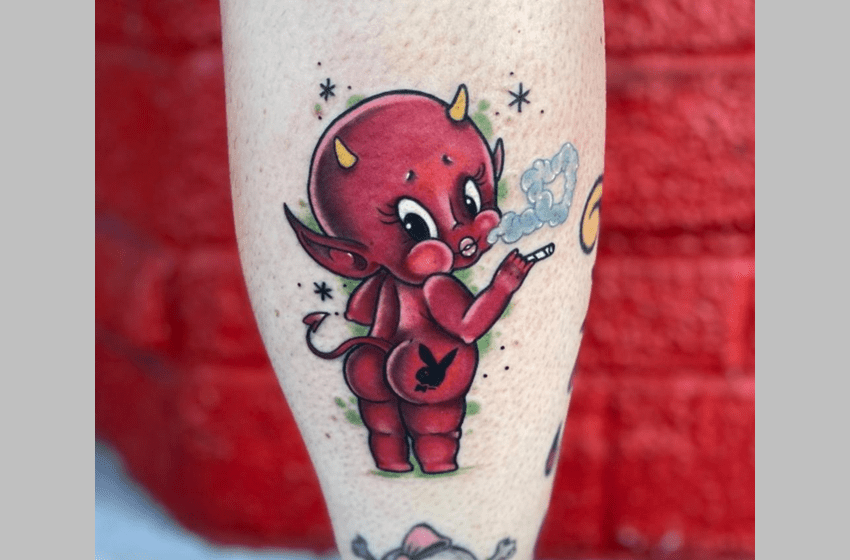 People often sport a cute devil tattoo just for fun and as a means to look quirky and get attention. Baby devil tattoos are generally very popular among bikers, and they are often portrayed with an angel counterpart as a symbol of balance between bad and good. 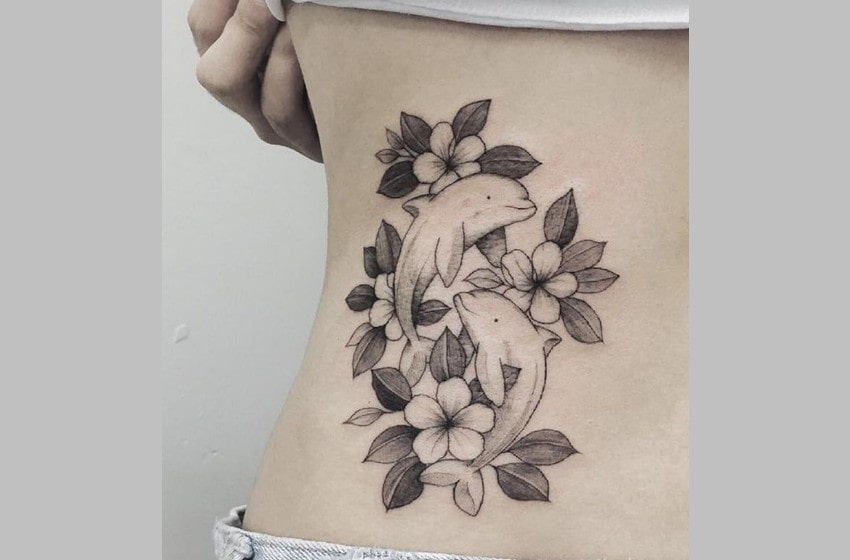 Dolphins are among the most intelligent and lovable creatures on earth. These beautiful beings are known for their playfulness, their love of freedom, and the vastness of the sea. A dolphin tattoo symbolizes free-spiritedness, independence, and cheerfulness.

Dolphin tattoos embody harmony and a sense of belonging to a community. They also represent happiness, friendship, love, intelligence, sensitivity, and connection. A tattoo of two dolphins represents partnership, duality, cooperation, and balance. So many couples and close friends tend to get matching dolphin tattoos. 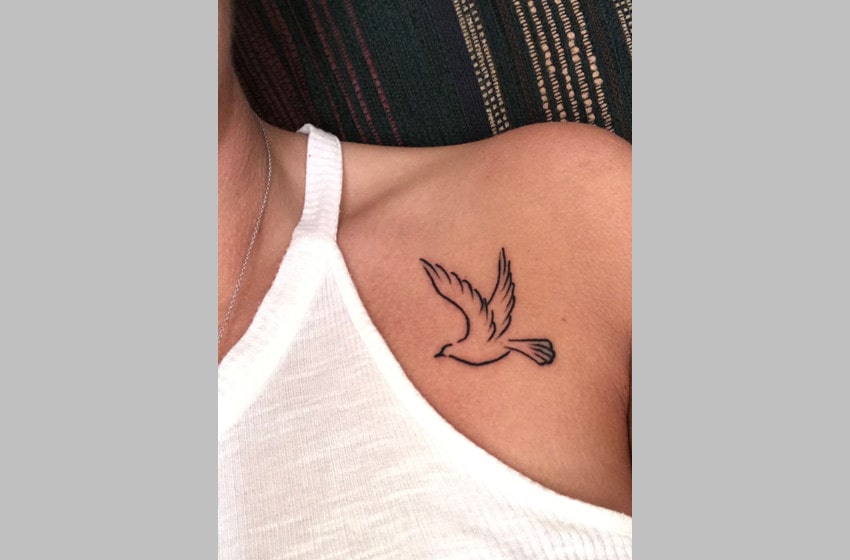 Throughout the world, doves have been a symbol of peace, positivity, and harmony.

Since doves are believed to only mate with one partner all their lives, doves are seen as a symbol of unwavering love and devotion.

In Christianity, doves are considered to be the messengers of peace and love. A flying dove tattoo symbolizes hope, openness, and faith, whereas a dove feather signifies peace and serenity. Dove tattoos also represent new beginnings, joy, beauty, victory, and free spirit. 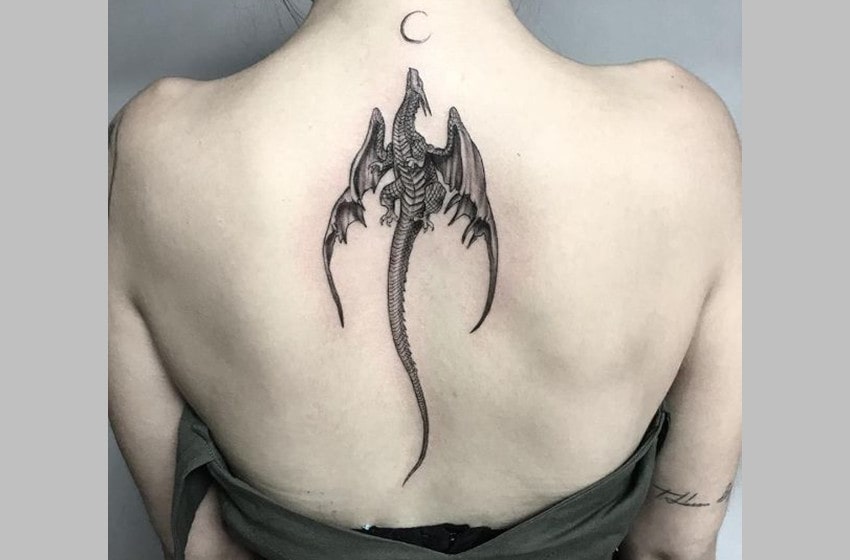 In many legends, mythologies, and folklore, dragons are either worshipped or feared. Dragons are believed to be reliable creatures, and dragon tattoos symbolize strength, power, courage, and protection.

These legendary beings have also been associated with passion and nobility, and sporting a dragon tattoo is considered to be a symbol of fierceness. In China, dragon tattoos also symbolize luck and longevity.

You don’t necessarily have to pick a tattoo that’s full of meaning when you’re planning to get inked. You also don’t need any elaborate and lavish designs to convey a deep message. This list of tattoos with meanings includes not just simple but also subtly beautiful tattoos.

Nevertheless, the universal meaning behind a tattoo is not as important as your intention. Because ultimately, it’s your tattoo. As long as it means something to you, its universal meaning doesn’t really hold much significance.