Everything You Need to Know About Red Pubes 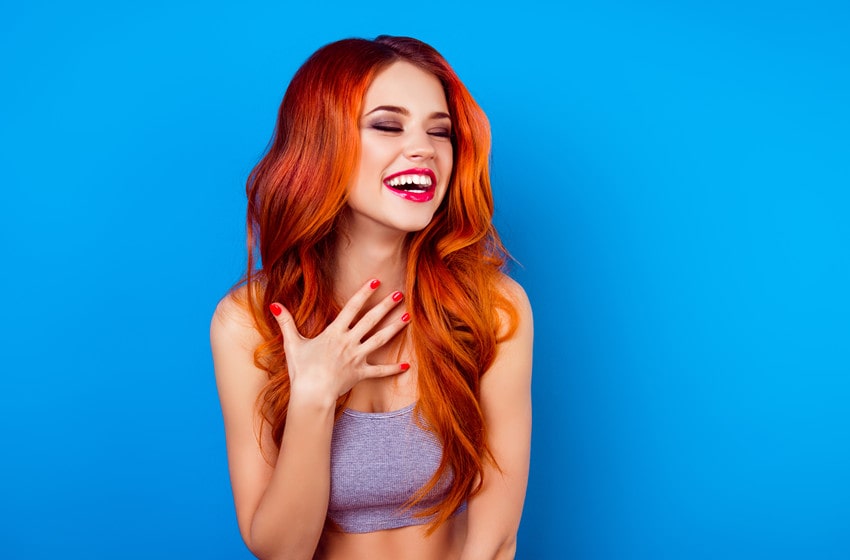 “Does the carpet match the drapes?” Ask any redhead what might be the most common question they’ve heard from guys and gals, and they’ll likely mention the world’s fascination with red pubes. Red pubic hair is not that common, and that’s precisely what makes it such a hot topic. So let’s see what all the fuss is about!

Do Gingers Have Red Pubes? 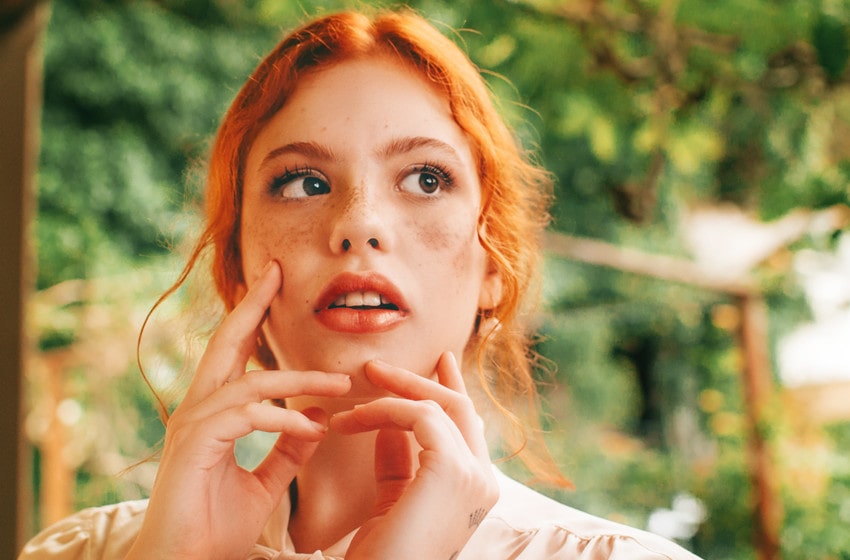 Curiously enough, just because someone is ginger doesn’t necessarily mean they have red pubes. Since pubic hair doesn’t depend on your hair color, it may not match it at all.

Melanin is the main culprit here. Different parts of your body can have different levels of melanin, so your body hair doesn’t have to match everywhere. For instance, some people may be naturally blonde but have dark arm hair and eyebrows. Likewise, redheads may have fire-kissed tresses, but their crotch area may be darker.

In the end, pubic hair color depends on your genetics. If a redhead has won the genetic lottery, perhaps they may actually have red pubes (albeit a bit darker than their natural hair color). In most cases, pubes are closer in color to someone’s eyebrows than their hair.

How Common Is It to Have Red Pubes? 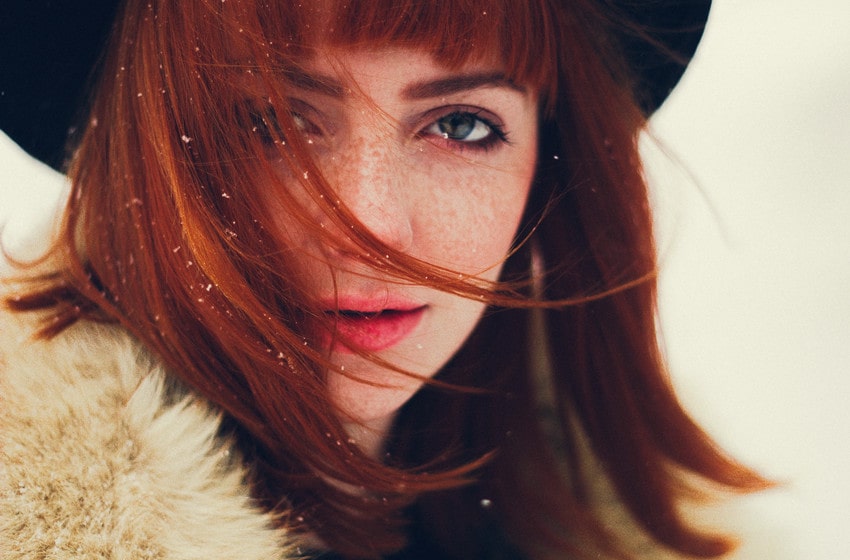 Every person has melanin-forming cells called melanocytes, which affect the color of their hair, eyes, and skin. An exception is someone with a genetic condition called albinism. In that case, they still have those cells, but genetic mutations have led to them being unable to produce melanin.

There are two types of melanin that can determine one’s hair color: eumelanin and pheomelanin.

Eumelanin occurs in copious amounts in people with darker hair, eyes, and skin. It can be either brown or black, and a combination of the two gives you brown or black hair. Blonde hair, on the other hand, occurs if someone has no black and just a tiny amount of brown eumelanin.

This does make red hair a curiosity, as it happens if someone has more pheomelanin than eumelanin. Pheomelanin is a type of melanin pigment that is attributed to yellow, pink, and red hues in hair and skin.

Statistically speaking, red hair is rare, and having red pubes is probably even rarer. More than 90% of people around the world have brown or black hair, while red hair occurs in as little as 1 to 2 % of the population. As pubic hair doesn’t have to match your hair color, red pubes are thus even less common, occurring in only 1-2% of people around the globe — or fewer!

Red Hair as a Recessive Trait

The amount of melanin someone has is just one piece of the puzzle here. Scientists have discovered that redheads actually have a gene mutation in the MC1R (melanocortin 1 receptor).

This mutation is the reason redheads have more pheomelanin than eumelanin. Their MC1R isn’t activated, as otherwise, there would be a clear balance between those two types of melanin.

Redheads are rare, however, because both parents have to carry a copy of the MC1R gene. Genes come in different variants called alleles, which are matching genes that you inherit from your parents.

As alleles contribute to a person’s appearance, they play a huge part in determining the color of your hair. For example, if both of your parents give you brown alleles, you are likely to have brown hair. Similarly, if they provide red alleles, you will have red hair.

Since red hair DNA is a recessive trait, the chances of having a red-headed child are slim if you and your partner aren’t redheads. But even though both parents have to carry the red allele, this doesn’t have to be obvious based on their appearance.

You can be a red hair DNA carrier even with brown or black hair, so if you have a child with a natural redhead, there’s a 50% chance of your offspring having red hair too. Similarly, if both parents have hidden red hair DNA, they have a 25% chance of having red-haired kids!

How to Take Care of Your Red Pubes 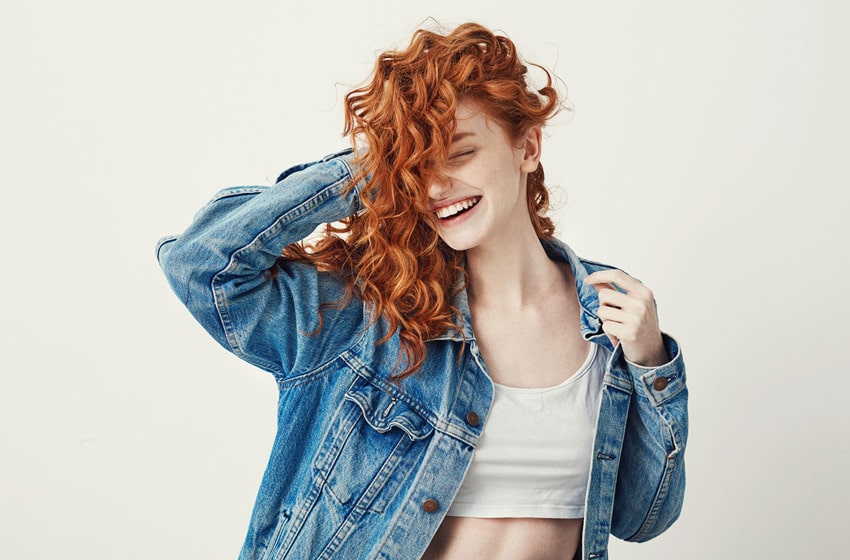 Grooming your red pubic hair isn’t necessary per se, as there’s nothing wrong with having lots of hair down there. If you want to take care of your pubes, though, there are various methods to try out:

Quick, affordable, and relatively easy, shaving is usually the preferred method of hair removal around the globe. It works on all pubic hair colors, though if you’re a redhead, you may have sensitive skin, making you more prone to razor burn, rashes, and more.

Ultimately, shaving can be a fantastic way of keeping your pubes neatly groomed, as long as you prep for it properly. Here are some tips for smooth hair removal that should keep your crotch bump- and redness-free:

1. Always Use a Sharp Razor

With a sharp razor, you can really get a close shave without having to press down on your skin too much. The best option is to always use a new one when you have to shave down there, but you can also go for reusable razors to save some money.

Switch them out if you notice that the blades are pulling the hair, though. That constant dragging can irritate your skin!

Exfoliating your skin beforehand will push out any dirt and dead skin cells out of your crotch area, which should help the razor glide smoothly. In general, shaving is also easier if you trim your pubic hair a bit (to a length of a few centimeters).

3. Use Shaving Cream and Moisturize After

Before shaving, wash the area with some warm water and soap to remove any dirt. Then, apply some shaving cream to help the razor glide over the hair and reduce any chance of irritation. Never shave on dry skin — you will irritate your skin, or worse, nick yourself!

Always shave the hair in the direction of hair growth so that you don’t irritate the follicles. Once you’re done, pat the area dry and apply some lotion or moisturizer to keep the skin supple and irritation-free. If you’re prone to ingrown hairs, you can also slather on some specialized creams to try to prevent them.

Another option is to use an electric razor. Compact and usually suitable for both dry and wet shaving, these razors are the ideal gadgets to take with you when you’re on the go and need to get rid of hair fast.

Sugaring and waxing are often confused, but the idea is the same. Both methods remove the hair from the root, leaving you with smooth skin for about 3 to 4 weeks, depending on how fast your hair grows.

Waxing is usually considered more painful and can cause irritation, some ingrown hairs, and bumps. Sugaring, on the other hand, is one of the best options for sensitive skin as it results in minimal irritation.

The ingredients aren’t the same either. Wax may contain different additives that can, on occasion, irritate people with sensitive skin (such as redheads). In contrast, sugaring paste is a mix of water, sugar, and lemon, so it’s less likely to upset the skin.

If you don’t love the idea of going all bare down there but don’t want to have hair poking out either, you can groom your pubic hair with trimmers. These tools don’t cause any pain and are unlikely to irritate you since they don’t remove hair right from the root.

Besides that, they often have various guards that protect the skin from cuts, and you can even customize the hair length.

Finally, if you’re fighting a losing battle with your red pubes, you may decide to try out laser hair removal. Unfortunately, there’s no guarantee that it will work for you.

Since the process is based on finding contrast on the skin (pale skin in contrast to dark hair), people with red or fair hair may not be satisfied with the results in the end. The laser might not be able to distinguish between the skin and the hair, so ultimately, it may be ineffective.

Don’t despair, though, as there is a form of permanent hair removal you can try out. It has been said that electrolysis is a good solution for those eager to banish hair from their bodies for good.

This method involves inserting a probe into the hair follicles and damaging them enough to kill the roots and make the hair fall out. It’s also quite versatile, as it can work on all skin and hair types and colors.

Just like with laser hair removal, you may need to have a few sessions to remove all of the hair, and there may be some side effects involved. Still, once you’re done with the sessions, that’s it — you won’t have to worry about grooming your red pubes again!