Sweet Paradise: 12 Most Expensive Chocolates in the World 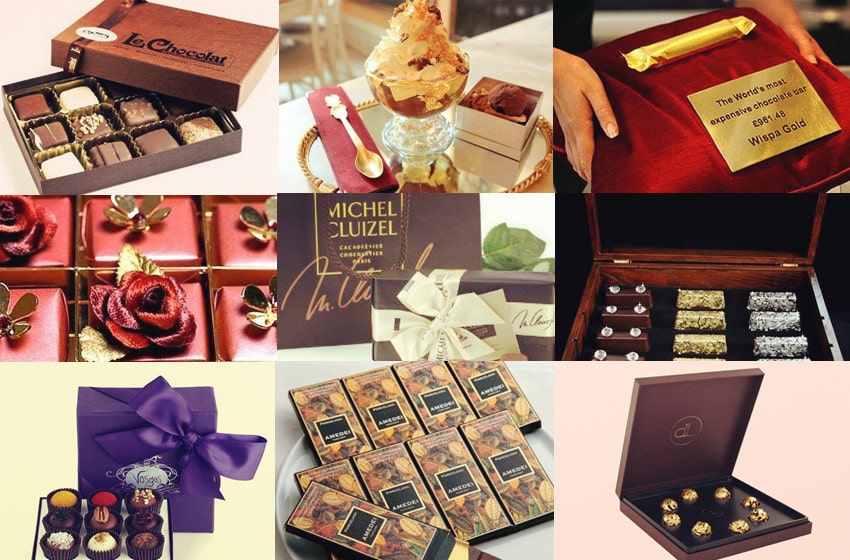 It’s hard to deny that chocolates are one of the most popular delicacies in the entire world. In fact, almost everybody, no matter their age, loves to eat these sweet treats. And while chocolates used to be only reserved for society’s elite, nowadays, anyone has access to them.

But even though most of them are cheap, there is still a steady supply of luxurious and costly chocolates. However, purchasing them by yourself would cost an arm and a leg. Luckily, you can always take a peek into the amazing dessert industry and learn more about the most expensive chocolates in the world.

However, while it does contain some of the finest chocolate created by Lake Forest Confections, the stunning price is mostly due to the included jewelry.

Yes, you’ve heard that right — Le Chocolate Box comes with a variety of necklaces, bracelets, rings, and other amazing jewelry from Simon Jewelers. Not only that, but each piece of jewelry contains a special collection of diamonds, sapphires, and emeralds.

Unfortunately, Le Chocolate Box was mostly a marketing stunt, meaning that it is not available for purchase today. Even so, this impressive display of elegance and style remains the most expensive chocolate in the world.

Next in line is the famous Frrrozen Haute Chocolate sundae, whose main purpose was to promote the New York restaurant Serendipity 3. Its addition to the menu took the world by surprise, even setting a new Guinness Record for Most Expensive Dessert. More specifically, one of those delicious chocolate sundaes would have set you back by $25,000.

So what made the Frrrozen Haute Chocolate sundae so highly priced? For starters, it was made out of a 28-cocoa blend, 14 of which were amongst the most expensive in the world.

Additionally, the dessert was decorated with 5 g of edible 23-karat gold and used to be served in a goblet lined with gold. And if that wasn’t enough, even the golden spoon, which you could take home afterward, featured white and black diamonds.

But just like Le Chocolate Box, the Frrrozen Haute Chocolate sundae was more of a marketing tool. While it was available for a short period of time, nowadays, it’s only a legend in the world of chocolate. 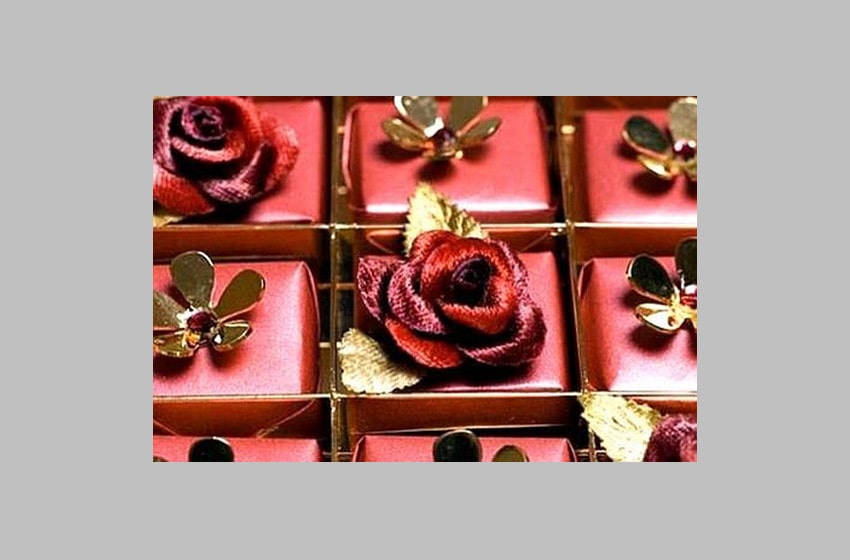 If you are intrigued by jeweled chocolate, then the famous Swarovski Studded Chocolate box is right up your alley. Priced at $10,000, it was the result of a collaboration between the Lebanese chocolatier Patchi and the department-store franchise Harrods. Their main goal was to create one of the most exquisite chocolate boxes in the world, and they did a fine job.

But why is the Swarovski Studded Chocolate so unique? Simply put, each box contains 49 pieces of dark chocolate studded with Swarovski Crystals and dressed in gold and silk roses. They are also wrapped in Indian silk and placed in a leather box, which provides a high-class look and feel.

Sadly, the Swarovski Studded Chocolate box is no longer for sale. However, Patchi, the famous chocolate store, which is responsible for this gorgeous dessert, is still creating delicious treats. In fact, you can even build your own chocolate box for around $150, allowing you to taste a bit of what makes Patchi’s desserts so sought after.

In 1999, a well-known chef from Denmark, called Fritz Knipschildt, established a chocolate company that he named Kipschildt Chocolatier. He went on to create one of the most expensive chocolate truffles in the world, priced at $2,600 per box. And while the secret behind this delicious dessert is still unknown, the master chef shared a bit of his creative process.

Knipschildt starts by mixing Valrhona chocolate with vanilla. Then, he adds sugar, truffle oil, and cream to create one of the most smooth and tasty chocolate blends in the whole industry. Then, he uses the blend to cover French Perigord truffles, which usually cost $1,000-per-pound. And voilà, the delicious Chocopologie Chocolate Truffles are ready to be eaten.

If you want to try this amazing dessert by yourself, you can purchase it directly from Chocopologie. However, unlike normal chocolate, you can’t just go into the store and buy ten boxes. Instead, you’ll have to order them in advance and wait until the master chocolatier, Knipschildt, does his magic. And if reviews are anything to go by, the wait is 100% worth it! 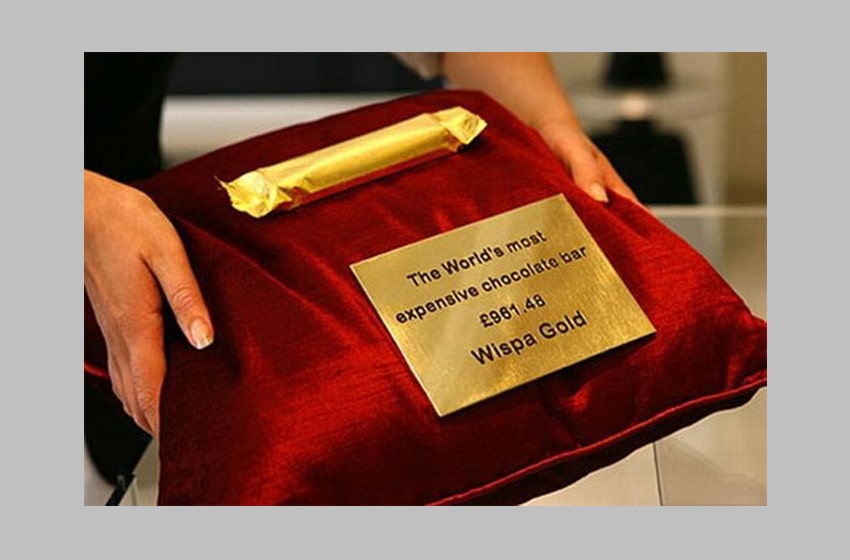 Cadbury is a popular chocolate manufacturer that is responsible for creating a variety of highly expensive desserts. However, their most famous product was the Wispa Gold Chocolate, which had a retail price of $1,600.

While it was originally launched in 1981, this expensive chocolate bar was brought back in a simpler and less pricey form in October 2008 thanks to a variety of celebrities.

The Cadbury Wispa Gold Chocolate was so costly because of the premium Madagascan cocoa beans. Not only that but each chocolate bar was wrapped in edible gold leaf, adding more value to this already extravagant product.

But nowadays, Cadbury is selling a scaled-down version of their famous Gold Chocolate, meaning that anyone can try it at a more affordable price. So if you want to experience the magic of Cadbury, be sure to check your local retail shops.

Ever dreamed of eating gold or silver? Thanks to Cocoa Gourmet’s Royal Collection of Chocolates, your dreams can become reality and all it takes is $1,250. Yes, you’re not reading it wrong — Cocoa Gourmet is creating edible gold, silver, and even diamonds.

More specifically, they are using Swiss ganache, which is a dark, semi-sweet combination of chocolate and cream. Then, they mix the chocolate with edible gold, silver, and diamonds, to create the exquisite Gold and Diamond Chocolate Box.

Each box contains 12 pieces of chocolate — four of them made using pure silver, four with sweet diamonds, and four with 22-carat gold. So if you fancy yourself a royal treat, you can always purchase the Cocoa Gourmet’s Royal Collection and enjoy the flavorful taste of diamonds, gold, and silver. 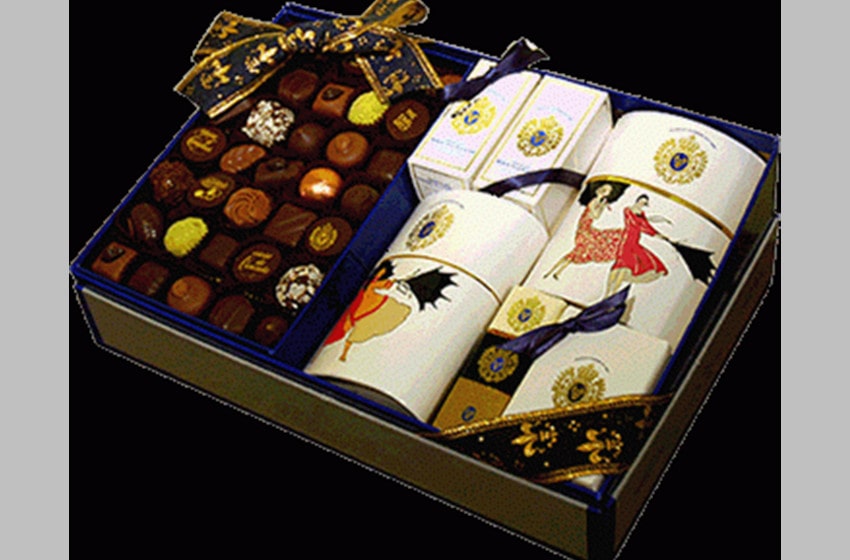 Still up for some royal treats? Then it’s time to take a look at Debauve and Gallais, and its famous Le Grand Louis XVI. The company was initially founded in 1800 by Sulpice Debauve, who was a royal chemist at the time. Twenty years later, he was joined by his nephew, Antoine Gallais, and together they developed what people know today as Debauve and Gallais.

The company’s biggest seller is Le Grand Louis XVI, which has a stunning price of almost $900. What makes this chocolate so interesting is the fact that it contains 99% cocoa, making it one of the strongest dark chocolates on the market.

Not only that but Debauve and Gallais’ reputation also makes Le Grand Louis XVI much more sought after, especially for chocolate connoisseurs.

Nowadays, anyone can give Debauve and Gallais chocolate treats a try, provided they have the money. And while Le Grand Louis XVI remains its most successful product, there are other types of delicious chocolate waiting to be eaten. 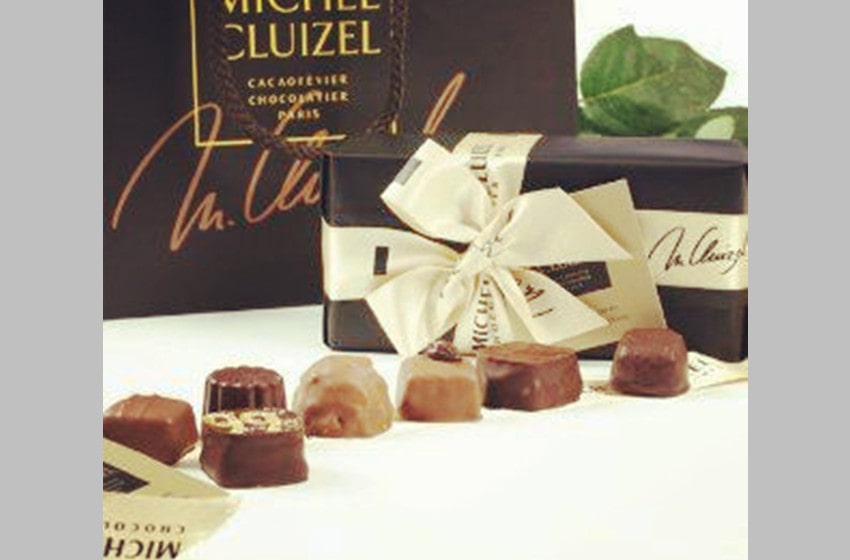 Started in 1948 in Normandy, Michel Cluizel has quickly become one of France’s largest chocolate manufacturers. Over the years, this company has focused on offering a variety of high-quality chocolate products. However, their most famous products are the Michel Cluizel Boxes of Assorted Treats, which can be purchased for about $895.

But why pay so much for some chocolate? To put it simply, Michel Cluizel has its own private cocoa farms throughout the globe, in regions such as Venezuela, Java, and Sumatra.

As a result, each piece of chocolate has an amazing taste that other companies have struggled to match for years. Additionally, the box contains 400 pieces of this delicious handmade chocolate, each of them wrapped in a specially designed package.

So if you are up for a special treat, then you should consider giving the Michel Cluizel Box of Assorted Treats a try. Just make sure to eat the chocolate on time, as it tends to expire pretty quickly. 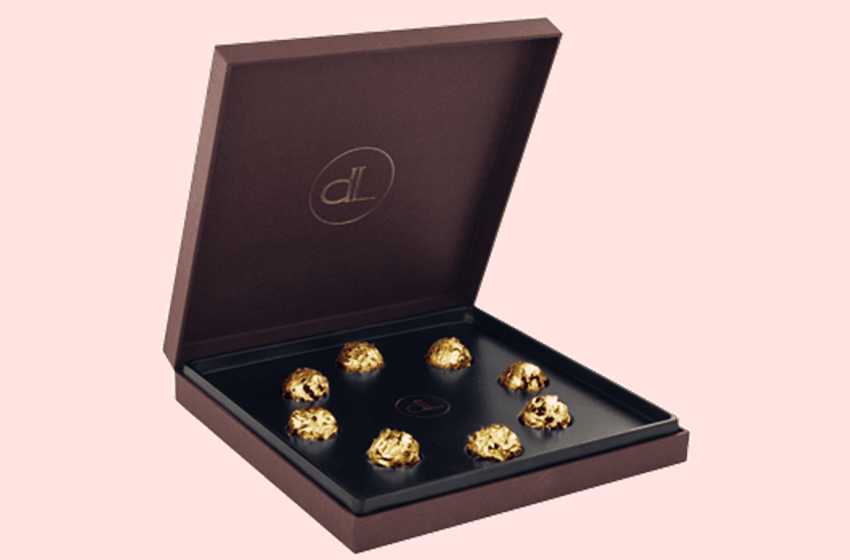 The Swiss company DeLafée is well-known for its wide range of products that contain edible gold. However, they are mostly famous for their DeLafée Gold Chocolate Truffles, which cost a staggering $504.

At first glance, DeLafée’s Truffles might seem like any other basic chocolate out there, but they are nothing close to basic. They are made out of a blend that contains high-quality cocoa beans, sugar, coconut oil, cocoa butter, and milk powder. But the secret ingredient is the 24-carat gold flakes, which are 100% edible.

Looking to give the DeLafée Gold Chocolate Truffles a try? Then you can find them at DeLafée’s official online and physical stores. And if the tasty chocolate is not enough of an incentive, each package comes with a real Swiss gold coin, adding to the overall value of those amazing truffles. 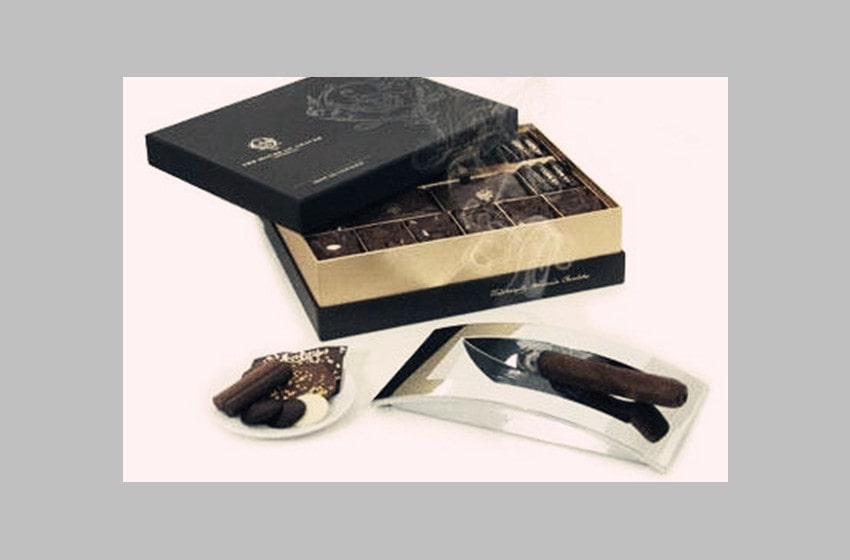 Even though the House of Grauer is a cigar manufacturer, it also creates a variety of coffees, teas, and chocolate. In fact, its Aficionado’s Collection is a box of chocolate that tries to shorten the gap between cigars and chocolate.

Imitating the shape of cigars, the Aficionado’s Collection Chocolates are made for those who love both cigars and sweet treats. But not only do those tasty chocolates look like cigars, they also copy their aroma. Yes, that’s right; the House of Grauer uses Italian roasted hazelnut and milk chocolate to emulate the cigar aromas.

However, people that want to indulge in this high-class product will have to spend $275 per box. Nonetheless, the Aficionado’s Collection is truly unique, especially since no other chocolate cigars leave such a lasting impression on the senses. 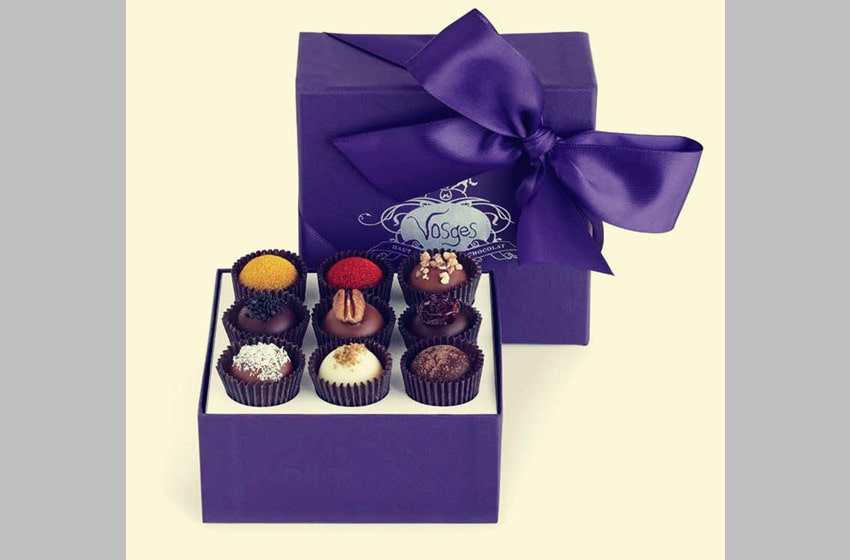 Vosges Haut Chocolat is a Chicago-based company owned by Katrina Markoff. She is famous for creating some of the most interesting chocolate in the industry by using unusual ingredients.

More specifically, she incorporates anything from cinnamon and ginger to Mexican chili and even bacon into her recipes. As a result, Vosges Haut Chocolat sells inventive products, such as the delicious Black Pear Chocolat and the spicy Red Fire Chocolat. And since Markoff is the one that handpicks each ingredient, her chocolates are both personal and unique.

But if you want to give them a try, you’ll have to spend as much as $90. Even so, tasting any of the Vosges Haut Chocolat products is an amazing experience that you can’t afford to miss.

Last but not least, it’s time to take a look at Amedei and its high-quality Porcelana Chocolate Bar. This chocolate bar, which has countless awards under its belt, can cost up to $90. So what makes it so unique?

Firstly, the name Porcelana is a reference to the translucent color of Amedei’s cocoa beans. Why is that the case?

So if you want to experience the taste of pure cocoa, Amedei Porcelana is as close as you can get. Just make sure that you don’t eat it all at once!

Overall, it’s clear that chocolate can be more than a simple sweet treat. In fact, in the right hands, it can become a work of art. From the stunning Le Chocolate Box to the Amedei Porcelana, chocolate can come in any shape or form.

And while most high-end chocolate products are very expensive, some famous manufacturers are also selling lots of budget-friendly alternatives. So if you’re willing to do a bit of digging, you can surely find affordable, delicious and exquisite chocolate.