Cheetah vs. Leopard: What Are the Key Differences?

Every cat lover can agree that big cats are majestic. However, while you’re most likely able to tell a lion apart from a tiger, other species don’t make it so easy. Take cheetahs and leopards for example. Everyone has an idea about what they are but when you put them side by side, you’ll probably struggle to tell them apart. But worry not!

Today, let’s dive into the cheetah vs leopard discussion, to help prepare you for your safari trip or the next trivia game!

The Differences Between the Cheetah and the Leopard

As mentioned before, cheetahs and leopards can look very similar to each other, especially if you put them side by side. At first glance, they appear to have the same body composition, color, and spots. However, that is only an illusion. Those similarities actually constitute the biggest differences between these gorgeous animals.

So, let’s go over some cheetah vs leopard facts, and dissect the biggest differences between them.

1. The Coat and the Spots

The first difference in the cheetah vs leopard debate is the coat, or rather, those unique spots these beauties boast. But wait, how do you tell them apart based on their spots? They’re spots! However, don’t be fooled, because even spots have nuance.

To put it simply, the cheetah is the only one of the two that actually has what can be called spots. They’re individual, solidly round, or oval black spots that cover the cheetah’s body. In contrast, the leopard has a much more complex pattern on its coat called a rosette. These markings are irregularly shaped and much more tightly packed than spots.

Those markings serve as camouflage for both animals. Cheetahs use spots to offset the shadows in the gray-hued grasses they inhabit, as do leopards. They work beautifully to hide both animals in the dry savannah landscape, which is a great help when they’re stalking their prey.

However, they also work as a defense mechanism, as it helps leopard and cheetah cubs stay hidden from larger predators.

Lastly, there’s their coat color. A cheetah has tan fur, a few shades cooler than the leopard’s. In contrast, the leopard’s coat has a more yellowish hue.

Next to the fur, the second key difference between the cheetah and the leopard is their body composition. Both animals exhibit different behaviors and different hunting styles. As a consequence, they’ve evolved different traits to make them more efficient in hunting their prey.

Apart from their fur, the cheetah and the leopard have different head shapes and facial markings. Cheetahs have small, rounded heads and something called a ‘tear mark’. These black lines go down from the inner corner of their eyes down the sides of their nose to their mouth.

They’re a very important part of the cheetah’s anatomy, as they help reflect sunlight while the animal is hunting. A leopard, in contrast, doesn’t have these marks, since it’s a nocturnal animal. It also has a stockier head, with larger teeth that help it drag prey up trees.

When doing the cheetah vs leopard size comparison, it’s actually the cheetah that wins. Leopards are one of the smallest big cats in the family. However, they’re much stronger and bulkier with muscular legs that are perfectly suited for climbing trees. They can weigh anywhere between 30‒40kg, with males usually weighing more than females.

Cheetahs, on the other hand, are slightly taller and more slender and can weigh between 60‒70kg.

As the fastest land mammal, it’s not surprising that their entire body is built for speed. This is why they have a slender torso, thin stomachs, and long, powerful legs that can help them reach speeds of up to 113km/h (70mph). Leopards aren’t quite so proficient at running, seeing as they can only reach 60km/h (37mph).

The last points of comparison in the cheetah vs leopard debate are actually the subtlest ones. It’s their claws and tails. First, cheetahs have non-retractable claws, which help them rapidly accelerate while running.

Their tails have a flatter shape, and function as rudders to help them turn and accelerate while running. In contrast, leopards have retractable claws, perfect for tree-climbing. Their tails are more rounded in shape, which provides them with the optimal balance necessary for climbing.

When doing a cheetah vs leopard comparison, the biggest difference between them remains their behavior. This includes their hunting styles, habitat, and lifecycle.

Firstly, the cheetah is diurnal, meaning that it hunts during the day. It primarily relies on its speed to ambush its prey and chase it down in short bursts.

Because speed is key to their hunting style, they prefer large, open areas like savannahs and grasslands to accommodate their hunting. They’re typically solitary creatures, with the only exception being males that can move in packs of 2 or 3.

They also have a relatively short lifespan and higher cub mortality. Cheetahs can live 8‒10 years in the wild and are much more susceptible to dying while they’re still cubs. This is primarily because their mothers have to leave them alone for extended periods of time. Consequently, they’re more vulnerable to other predators.

This is in sharp contrast to leopards which have longer lifespans and lower cub mortality. They can live 12‒17 years in the wild and usually give birth to litters of 2‒3. Fewer cubs mean less work for leopard mothers, meaning that they can protect them more efficiently.

Moreover, leopards are nocturnal animals. They sleep during the day and prefer to hunt by ambushing their prey from treetops. This is why they choose denser areas for their hunting grounds, as more cover makes stalking prey easier.

Which One Is More Aggressive?

After looking at some key traits, it’s time to answer the most important question every tourist has — how aggressive are these big cats? First, let’s get one thing out of the way — these are wild animals. As tempting as it is to get close to them and pet them, doing so is dangerous.

Even if things are going well at first, both a cheetah and a leopard can turn on you on a whim. Hence why it’s best to keep your distance.

However, we can reasonably say that in terms of aggression, cheetahs are much safer. Though they have the fearsome reputation of being nature’s Ferrari, they’re actually very gentle animals. They have a higher degree of social flexibility and are much more open to interacting with humans.

They’re also one of the few species of big cat that meow and purr. If that isn’t absolutely precious, we don’t know what is.

Leopards, on the other hand, aren’t that friendly. They’re strictly solitary creatures, so they don’t appreciate getting disturbed. Moreover, they can get very nasty when roused, or cornered. In fact, they’re one of the few predators that actually get more aggressive when wounded, as opposed to cheetahs whose first instinct is to flee at the sight of danger.

Not only that but they have been known to attack humans. Leopards actually kill more humans than any other animal in India.

However, despite having a fearsome reputation, these animals still put self-preservation first. They view humans as predators, so unless forced to do so, they’re unlikely to interact with you. This means that you don’t have to worry about a leopard spontaneously charging at you during your safari. 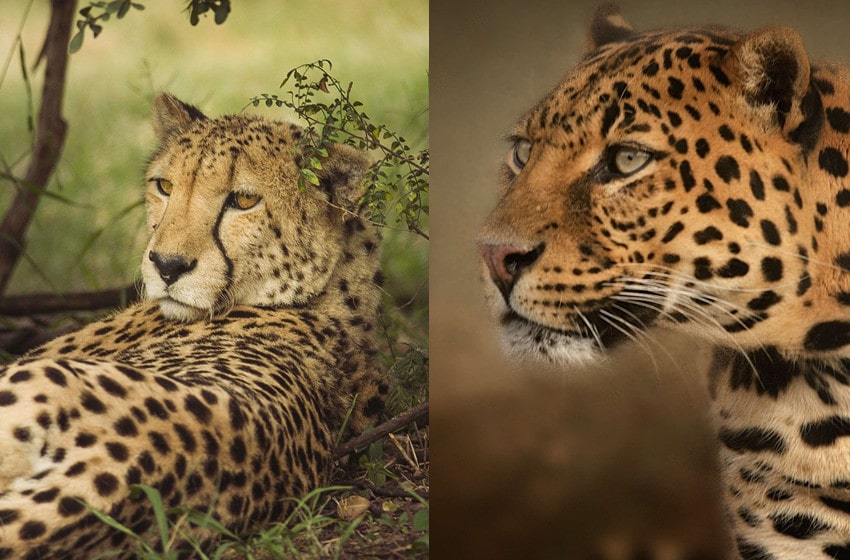 Now we get to the fun question. Cheetah vs leopard — who would win in a fight? Cheetah fans may not like the answer. As beautiful as these speedy animals are, they still can’t match up with leopards. For one, unless they’re racing against each other, a cheetah’s speed doesn’t actually help it.

In fact, its speed is actually its biggest weakness since it makes the animal prone to overheating. After running prey down, cheetahs actually need a cooldown before they can even get around to eating it.

This makes it easy for other predators to come along and rob them of their kill. And because they have slender, fragile bodies, they’re easily scared off. In contrast, a leopard is nowhere near as easily intimidated. This animal is fierce, aggressive, and fearless, even after it’s been wounded.

Their bite force is 300‒310 PSI, which is slightly lower than the cheetah’s 475 PSI. However, since the animal has a stronger jaw, a stockier, and a more muscular build it can easily bring down the larger and more slender cheetah.

Luckily, since these two animals live in different areas, they’re unlikely to pick a fight with each other. But if such a thing happens, the leopard is definitely going to be the winner.